Bob Lupton is one of Atlanta’s spiritual pillars. His work in the inner city is legendary and his best-selling book Toxic Charity sheds fresh light on the effect of well-meaning ministry on the people being served. This post is from Bob’s monthly newsletter “Urban Perspectives.” Check out fcsministries.org for more info.

The man introducing me before the large church audience was obviously an admirer of mine. He showered me with accolades, portraying me as a brilliant visionary, a highly educated person who could have excelled at any profession but had chosen to instead live among the poor. And he concluded his glowing remarks saying, “And Bob is the most humble man I have ever known.”

With an introduction like that, what do I say to confirm my humility? How is the truly humble man to present himself? All I could think was to thank my flattering friend for his gracious words and affirm that, indeed, I was a very humble person . . .  and quite proud of it! Fortunately, the audience recognized my humor and erupted in hearty laughter.

Humility is one of those traits that is hard to fake. I have a friend . . . a very successful friend . . . who comes across as very humble. His quiet, self-effacing demeanor would lead one to believe he is a meek, shy person. At least at first.

Spend a little time with him, and it soon becomes apparent that his humble manner is a disguise. In fact, he has a very aggressive, competitive, hard-driving type-A personality that is anything but humble. To his credit, he recognizes that these innate tendencies can sometimes work at cross-purposes with the spiritual fruit he sincerely desires to cultivate. So his self-effacing manner is an honest attempt to rein in his forceful temperament. It’s hard to fake humility.

There is a saintly person in my church who has the reputation of being a very spiritual person. She reads Scripture and prays by the hour. She is quick to impart spiritual wisdom to anyone who expresses a need or concern, and she prays aloud with eloquence and emotional power. She amazes people with her biblical knowledge and spiritual depth. Her special relationship with the divine endows her with unique authority on matters of spiritual truth. This also makes it very challenging for her to be truly humble. Though she tries mightily to practice humility, these genuine attempts do little more than apply a thin veneer over an underlying base of spiritual pride. It’s hard to fake humility.

So what is true humility anyway? Webster’s definition . . . “a modest opinion of one’s own importance or rank” . . . merely touches the surface of this very complex trait. Or is “trait” even the right word to describe it? Maybe it is more a behavior or discipline than a disposition of one’s nature. It certainly is an elusive thing. As Martin Luther said, “True humility does not know that it is humble. If it did, it would be proud from the contemplation of so fine a virtue.”

It may be difficult to capture in concise words the essence of humility, but we certainly know what it is not: pride, vanity, superiority, arrogance, conceit, pretentiousness. Such blatant inhumility (if that is a word) can be quite a turn-off to people (and apparently to God as well, given the many Scriptures that denounce it). But then, self-abasement is not much healthier. Deprecating one’s self is likely to be either false humility or psychological deficiency.

So how do I attain true humility? Will there ever be a time when I can respond with a simple, sincere “thank you” if someone introduces me as “the most humble man they have ever known?” Probably not.

I am known too well by a wife and coworkers who have seen how public acclaim enlarges my hat size. They have witnessed, too, how my gaffes frustrate me and deflate my ego. No, humility will not be the word chosen to describe me by those who know me best. However, such friends do make it easier to follow the apostle Paul’s counsel: “Don’t think you are better than you really are. Be honest in your evaluation of yourself . . .” Among intimates, it’s nearly impossible to fake humility. And according to Luther, if I had it I wouldn’t know it anyway.

Scripture: Likewise, you who are younger, be subject to the elders. Clothe yourselves, all of you, with humility toward one another, for “God opposes the proud but gives grace to the humble.” (1 Peter 5:5)

Mentor Tip: The best way to model humility is to deflect the credit to Jesus for everything good about you. Realizing and communicating that “Christ in me” is the source of anything worth complimenting. 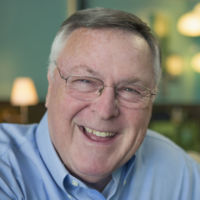 Bob has invested over 40 years of his life in inner-city Atlanta as a Christian community developer. Bob brings together communities of resource with communities of need through FCS, the non-profit he founded to empower neighborhoods to thrive. He is the author of several books including Toxic Charity and the widely circulated “Urban Perspectives,” a monthly reflection on the Gospel and the poor.

Wow. It is great to witness honest transparency and the purest way to deflect compliments to God who in the Spirit is the source of the Fruits of the
Spirit. Praise God from whom every blessing and good come. Surely not me

But still with a courteous ‘thank you’