Today’s post is courtesy of one of my closest friends and mentors, John Richie. John has a long successful career as a corporate executive. We’ve worked together twice. First when he served as COO of InterServ Services Corporation and later when he was CEO of Tax Partners LLC. I regularly quote John Richie, and I often refer to him as the smartest person I ever worked with. John is currently Chair of Venture in Atlanta, Georgia.

Saturday is the in-between day of our Easter celebration. The sacrifice of Good Friday is past. Loss and defeat happened with the burial of Jesus. Hope was vanquished. Fear was overpowering.

When we see evil destroy good and even win for a time, it’s profoundly discouraging. Kids wander, marriages dissolve, businesses fail, friendships end, bodies are destroyed. There is a deep reality in our lives around the apparent victory of evil. Everyone experiences it sooner or later.

We lose hope. Faith seems weak. Discouragement and fear overwhelm. The facts of life are cold and hard, and they sometimes seem like the truest things of all. It’s like the experience of the disciples on Saturday after Good Friday.

And if Christ has not been raised, then our preaching is in vain and your faith is in vain. We are even found to be misrepresenting God, because we testified about God that he raised Christ, whom he did not raise if it is true that the dead are not raised. For if the dead are not raised, not even Christ has been raised. And if Christ has not been raised, your faith is futile and you are still in your sins. Then those also who have fallen asleep in Christ have perished. If in Christ we have hope in this life only, we are of all people most to be pitied. But in fact Christ has been raised from the dead, the firstfruits of those who have fallen asleep.

If Jesus is not raised from the dead then . . .

There is nothing wrong with considering the awfulness of reality if Jesus is not raised from the dead. In fact, it’s commendable. On this Saturday in-between, it’s a bit of what the disciples felt as they experienced the loss and fear of His death without any hope of His resurrection. Experiencing the depth of Saturday gets us ready for what followed.

But in fact, Christ has been raised from the dead.

In fact! There is this one historical reality that stands above all of history. This is not religiously true or part of the myth. It’s a historical event that shows God’s mastery over all things. God acted decisively and changed everything. This is the power of the gospel on display as Jesus was transformed and raised from death to life . . . just as we will be one day too.

Instead of being pitiful, we are “more than conquerors.”

Instead of being futile and vain, our faith is the most important thing in this world and the next.

Instead of being unrighteous, we are redeemed and adopted into the family of God through the death and resurrection of Jesus.

Instead of being dead in the tomb, Jesus is at the right hand of God.

Instead of perishing forever, we will be raised again to eternal life, and in the flesh, we will see God.

Instead of Jesus being defeated, every knee will bow, and every tongue will confess that Jesus Christ is Lord to the glory of God the father. His is the name above every other name. He is the King of all Kings, and His kingdom is eternal.

Paul says this “in fact.” This fact changes everything.

Jesus Christ is risen. He is risen indeed. 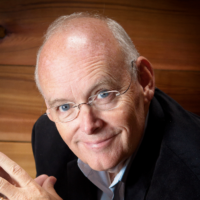 John has been on the Radical Mentoring board and currently leads mentoring groups through his church, Johnson Ferry in Marietta, Georgia, where he and his wife Martha have been members since 1984. They raised their three children at Johnson Ferry where John has also been a teacher and a deacon.

Thanks John. I agree that considering Saturday is powerful and important. As our pastor puts it, on Saturday there were no believers….everybody scattered….the “movement” was dead…..which makes Sunday all the more earth-shattering!!!
I’m gonna leave this here too: https://www.youtube.com/watch?v=nC_fqD6tV-4

Eugene Wallace, nicknamed Doc by the marketplace, exists to glorify God by leading, inspiring, and serving alongside others as they become biblical thinkers in every phase of their lives and aim to reach their God-given potential, promise, and purpose as Jesus-followers.

As Radical Mentoring’s Marketplace Mentoring Manager, Doc consistently interfaces and collaborates with various businesses and organizations that are seeking to implement or in the process of launching the Radical Mentoring model to shape their workplace culture.

Doc is a native Mississippian but has lived in the Atlanta area for more than twenty years. He holds a Ph.D. in organizational leadership and is a business school and seminary graduate. This background equips him to lean into his passions for leadership, business, and helping people apply God’s Word to every area of their lives. Doc loves the Lord and enjoys telling others about His goodness. In his spare time, you might find Doc listening to smooth jazz or stand-up comedy, watching sports, or most likely, spending valuable time with his family.