In 2000, Regi Campbell picked eight young men whom he believed to have a lot of potential. He invited them to his home and told them he’d meet with them three hours each month if they’d show up for every meeting and be there on time. He’d be totally open and transparent with them, telling them everything about his successes and his failures. His personal life . . . his business life . . . relationships . . . no holes barred. He would share the books he’d read. He’d have them memorize Scriptures that had helped him in his walk. But they’d all have to agree from the outset that at some point in the future when they were ready, they would “pay it forward” and invest in younger men just as he had.

The results have been profound.

“Graduates” have become elders in the church, small group leaders, and significant givers. Their wives say they’ve become better husbands and fathers. A few men have gone into these groups “foggy” about their faith and come out knowing for sure they are Christians.

In fact, it’s not even new. It’s simply an extension of what Jesus did as he mentored His disciples two thousand years ago. He poured His life into them and then sent them out to do the same. The results changed the world forever.

Mentoring is fueled by a sold-out follower of Jesus Christ with a desire to teach “up-and-coming” leaders how to integrate their faith into every facet of life. Information, even brought to life with inspiration, doesn’t lead to transformation. It takes a committed disciple “rubbing” the truth into another’s life as they walk together.

Radical Mentoring has evolved into a well-thought-out, transferable multiplication strategy. Several of our elders at North Point lead RM groups and mentoring has become an important part of their life and ministry.

Years and years ago, someone reached out and invested in me as a mentor. The impact of that mentor’s involvement in my growth can’t be measured. Since then, I’ve been blessed to have a series of mentors, men who have cared about me and poured their cups into mine. If you look back, you’ve probably had some men pour their cups into yours too.

Question: Who are you investing in? 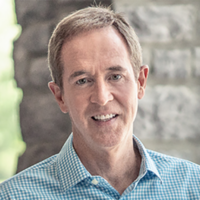 Communicator, author, and pastor Andy Stanley founded Atlanta-based North Point Ministries in 1995. Today, NPM is comprised of six churches in the Atlanta area and a network of more than 70 churches around the globe that collectively serve nearly 118,000 people weekly. Andy and his wife, Sandra, have three grown children and live near Atlanta.

It is very disheartening when you offer to open up to someone in need of mentoring and they are no shows. I am a mentor leader at our church and so many come in for help in all areas. Some are so hurting, but when it comes down to showing up and on time it doesn’t always happen! Jesus was the greatest mentor and I nave never read in my bible were he had this happen. I guess we need to look beyond this and be grateful God has brought change in and healing in the ones that do obligate? Thank you! Just needed to think it out.

The key is in setting expectations up front. Our approach is to say “This is the deal…these are the expectations. If you aren’t willing to sign up for them, then don’t apply”. Jesus didn’t heal everyone, and he didn’t mentor everyone. In one case, we see his group shrink from 70 to 12. Mentees have to want to be mentored, and want it bad enough to miss other opportunities.

Mentees gotta want to leave the familiar and get into the deep end of life as much as we do. Like the rich young ruler, sometimes the other lures of life are stronger than the desire to dig deep and grow more. I have to remember that I havent’t always been the most teachable either. Like Regi says, lay out the expectations and keep moving. Keep praying for them. God’s faithful to create the circumstances and opportunities. We just need to show up. Then, so do they.

thanks for the encouragement Jim.

Love this post. I can’t wait to lead a group in the future.

As Director of Women’s Mentoring at Radical Mentoring, Kristen Brady provides leadership and execution for our women’s mentoring platform, Known Collective. Her passion for mentoring stems from a belief in the life change that occurs when people sit toe-to-toe and share their stories, letting others know who they really are and encouraging them to do the same.

As Radical Mentoring’s Director of Marketing & Operations, Jackson Beetler develops or works with our team and creative partners to develop much of what you see from Radical Mentoring . . . website, emails, blogs, social media, mentoring content, you name it!

Jackson began working for Radical Mentoring in 2014 after graduating from the University of Georgia. Originally from Marietta, GA, he currently lives in Atlanta, GA. When not operating as Radical Mentoring’s digital wizard, you’ll probably find Jackson watching a movie, cooking a meal, or enjoying time with his family and friends, preferably over a cup of coffee (just don’t ask him to go to Starbucks!)